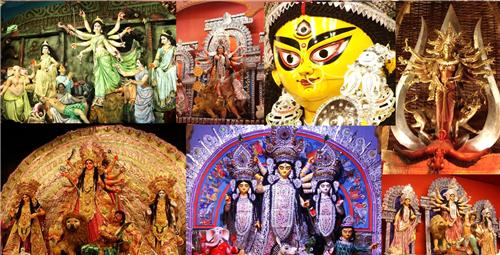 The spectacular fusion of the modern themes and decorations with the traditional rituals and customs followed during the celebration of this festival attracts hordes of visitors from within the country as well as from abroad.
Bagbazar
Bagbazar, one of the oldest Durga Puja pandals in Kolkata. The pandal is a relatively simple one with emphasis on tradition and culture.
Location: North Kolkata, along the river in Bagbazar. Near the Bagbazar Launch Ghat and Bagbazar Kolkata Circular Railway Station. The closest Metro railway station is Shayambazar.
Kumartuli Park
Kumartuli Park is a relatively young pandal, having been formed in 1995. It's particularly special because it takes place in the area where many of the Durga idols are handcrafted by professional clay modelers.
Location: North Kolkata, along the river at Kumartuli Park, just before Bagbazar (ideally, plan to visit both pandals). The nearest railway station is the Sovabazar Metro. It's also close to Sovabazar Launch Ghat.
College Square
Established in 1948, College Square is beside a lake. A special Kumari Puja is also held there.
Location: Central Kolkata. 53 College Street. Near Kolkata University, off MG (Mahatma Gandhi) Road. The nearest railway stations are Mahatma Gandhi Road and Central Metro.
Mohammad Ali Park
The Puja was started in 1969 and the idol has a classic ethereal look.
Location: Central Kolkata.
Santosh Mitra Square
One of the biggest and most spectacular pandals in Kolkata, Santosh Mitra Square was founded in 1936 as "Sealdah Sarbojanin Durgotsav" and renamed in 1996.
Location: Central Kolkata, in the Bow Bazaar area. It's off BB Ganguly Street, not far from Sealdah railway station. The nearest Metro station is Central.
Badamtala Ashar Sangha
From humble beginnings it grew to win an award for creative excellence in 2010. The pandal started experimenting with themes in 1999, and was one of the first in the city to do so.
Location: South Kolkata. Nepal Bhattacharjee Street, Kalighat. Right near the Kalighat Metro railway station and Rash Bihari Avenue.
Ballygunge Cultural Association
Ballygunge Cultural Association started organizing its Durga Puja celebration in 1951.
Location: South Kolkata. 57 Jatindas Road, Hemanta Mukherjee Sarani, Lake Terrace, Ballygunge. It's off Southern Avenue and Lake Road. The closest railway station is Kalighat.
Suruchi Sangha
Although this Puja pandal is more than 50 years old, it first found fame in 2003 when it won an award for the best decorated pandal. The craftsmanship is exquisite.
Location: South Kolkata, in New Alipore near the petrol pump on Nalini Rajan Avenue (close to the National Highway 117 intersection). The nearest railways stations are Majerhat and Kalighat.
Ekdalia Evergreen
Ekdalia Evergreen began in 1943 and has become well-known for its outstanding replicas of temples from all over India.
Location: South Kolkata, in Gariahat. You'll find it near Mandevilla Gardens where the South Point Junior School is, off Rash Behari Avenue towards Gariahat Flyover. The nearest railway stations are Ballygunge and Kalighat Metro.
Bosepukur Sitala Mandir
Established in 1950, Bosepukur Sitala Mandir is a multi-award winning Durga Puja pandal, earning it quite a reputation as one not to be missed.
Location: South Kolkata, in Bosepukar, Kasba. Drive towards Ruby General Hospital from Gariahat and you'll find the pandal around midway, near Bosepukar petrol pump. The closest railway station is Ballygunge.

Recent Changes in Durga Puja 2021 Celebration Due to Covid19