Kolkata is a holy abode to many popular temples. Each one of them are famous for their deities and unique architectural design. They are well-known for mythic legends. The city is a perfect place for a pilgrimage tour.

The presiding deity is Maa Bhavatarini, a form of Goddess Kali. Maa Kali is known as one ' who liberates her devotees from the ocean of existence. 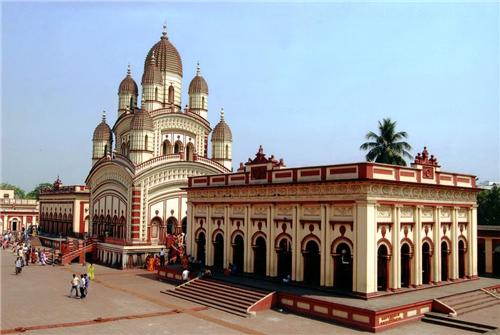 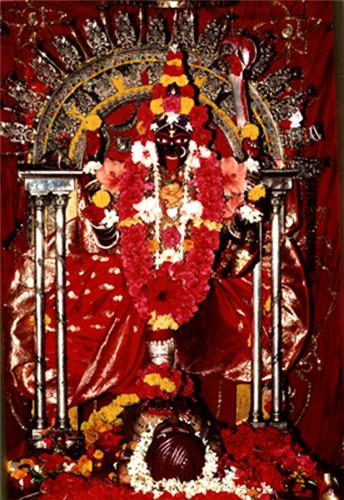 There is a legend associated with the foundation of this very old Hindu temple. According to it the temple built by Rani Rashmoni in 1855 following a dream in which the Divine Mother Kali suggeseted her to install her statue in a beautiful temple and arrange for the worship there.
Rani immediately purchased a 20-acred plot in the village of Dakshineswar. The large temple complex was built between 1847 and 1855.
In 19th century Ramakrishna Paramhansa a well known spiritual leader spends a valuable time of his life as temple priest and bring name and fame to this religious structure.

This temple is inspired from the traditional 'Nava-ratna' or nine spires style of Bengal architecture and is three-stored south-facing temple has nine spires distributed in two storeys, and stands on a very high platform with a flight of stairs.
Compound of temple contains a large courtyard surrounding the temple and the well clean rooms are associated with the boundary walls. The garbha griha houses an imposing idol of goddess Bhavataraini, form of Goddess Kali standing on the chest of a lying Shiva.


Near to the main temple lies twelve Siva temples constructed in typical Bengali atchala style. The respective twelve Sivalingas in the Dakshineswaratempleare:- Yogeswar, Jatileswar, Jatneswar, Nakeswar, Jagadiswar, Nakuleswar, Yajneswar, Nareswar, Nirjareswar, Nandiswar, Nageswarand Jaleswar. To the North east lies the Vishnu Temple or the Radha Kanta’s Temple.
If ever you come to visit this temple so you can watch the one hour Puja and Aarti and also have bhog of temple (lunch). Tuesdays and Saturdays are considered as most important days for worshiping of Maa Kali. Take part in Sandhya Aarti and feel the spiritual environment of the temple.
Dakshineswar Kali Temple is known for its ambiance. In the northeast of temple there is Dalan of Radha-Kanta and in west twelve Siva temples of Bengali atchala style stand in rows on the Hughli river.
Panchavati is a a famous spot for all those looking to mediate in peace. You can also find congregation of five ancient trees nearby the holy temple. You can also enjoy the boat ride.