Parks are perfect place to get rid from day to day stress and serve as perfect gathering place. The city of Kolkata is dotted with numerous beautiful parks. Young and old can be seen visiting popular parks in the city.
One among them is Deshapriya Park Kolkata which with its lush green beauty appeals every eye. Thanks to its lush green beauty and exquisiteness with which it leaves indelible  imprints on the minds of all those visiting the park for the very first time. 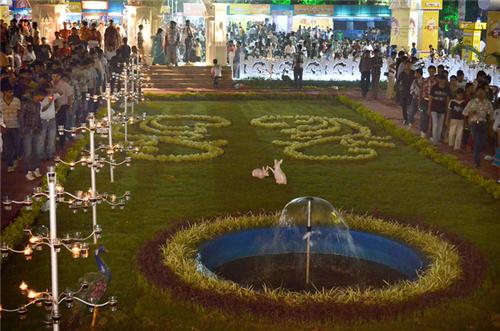 One of a kind!

The Deshapriya Park is a well known park in South Kolkata, West Bengal. Some of the cities nearby are Kasba, Salt lake Sector 3 and Salt Lake Sector 1.
You can find many health conscious citizens performing various exercises and Yoga asanas. Many youngsters can be seen playing various sporting games in the company of their near and dear ones.

Located in South Kolkata, it is often opted for playing games like football,cricket,tennis. You will also find professionals practicing and trying to master their sport here. There is a nearby restaurant where you can enjoy the local cuisines of Kolkata.
The Priya cinema hall is located just beside the park. Another point that makes this park so special is that every year Durga Puja is organized on its playground. Today it is one of the oldest Durga Puja venue in Kolkata dating back to 1938.
The Durga Puja is a very special festival to the people living in the locality and it also attracts worshipers from far and wide.  Puja is organized  by the Ballygunge Sarbojonin Durgotsav Samity, on a grand scale.
The biggest statue of Durga Maa is brought here . Because it’s held on such a grand scale, people from all sections of society  flock to witness the grand event in Deshapriya Park.

From dawn to dusk people from all walks of life can be seen visiting this ideal venue to get relaxed after day long work.  Whenever in Kolkata you must visit the place to witness its incredible beauty.

Explore more about Localities in Kolkata