Durga puja is the festival of happiness, it is the festival where the Hindus celebrate the victory of good over evil. Though several things have changed over the years in the celebration of Durga Puja, few things still retain its authentic value.
When I was young, Durga Puja fascinated me but I never knew what it really meant. The six days puja is backed with several stories that tell how it originated. Durga Puja is no different.  Read more
There are several stories that goes beyond normal human understanding to explain the stories of mythology. 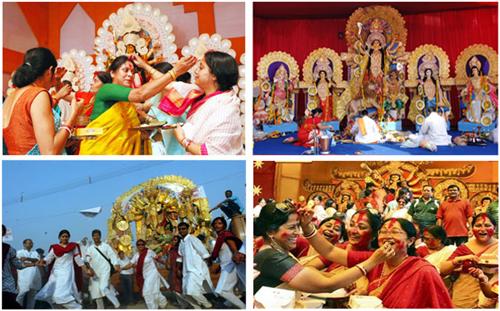 One such version of Durga Puja story introduced to me by my grandmother was the story of Mahishasura (the buffalo demon). In this story, Goddess Durga slays a demon named Mahishasura to bring peace and truth on the Universe.

West Bengal, especially Kolkata is known for celebrating this Puja in a grand manner. The puja’s celebrated here goes beyond religion. It is not only a symbol of good’s triumph but a festival where everyone forgets grudges and open their hearts to everyone.
Bengali’s celebrate this festival with great zeal. The preparation for this festival starts 6 months before the celebration date. Durga Puja is a five day festival and the states of West Bengal, Asom, Tripura, Jharkhand enjoys celebrate this week long celebration.
There are several things that are arranged by people on a group and individual level to make this entire affair a very grand and successful one. Here are a few things that are taken care of as pre-puja preparations.
Theme Puja is the essence of the festival. The concept of theme has become so important these days that different clubs go beyond expectations to create an outstanding pandal. Since the last decade Kolkata has been a very active participant in theme pujas.