Festivals and Fairs In Kolkata

At the apex of Bay of Bengal lies Kolkata, a city masked with the richness of Indian culture. Festivals and Fairs are events meant to bring various cultures and religions close to each other. No other city expresses it so lively than the City of Joy. All the festivals irrespective of caste and creed are celebrated with much fun and frolic in the city.The City of Kolkata becomes a lively place during festive season.
The major festivals observed in the city include Durga Puja, Kali Puja, Saraswati Puja, Eid and Christmas. 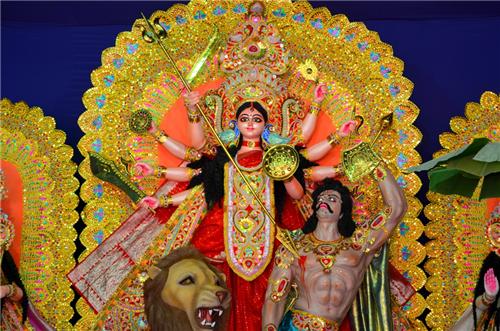 The most marked festival of Bengalis is the worship of three consequential deities, Goddess Durga, Saraswati and Laxmi. Heralding the Durga Puja festivities, hundreds of kite flyers engender a riot of colors in the sky proclaiming the celebration of the Kite festival as a mark of tourist festival and the beginning of the much awaited Durga Puja in Kolkata.

During the festive season, Kolkata gets dressed in sublime lights and stays aroused 24 hours adoring the city with flashes of the splendid decor of the goddesses in various imaginative forms. It is this time of the year, Kolkata decks up like a vivid puerile bride. The streets get embellished with pandals (ephemeral decorative scaffolds of temples), imaginatively adorned architectural models of the Goddesses magnetizing visitors from around the country. 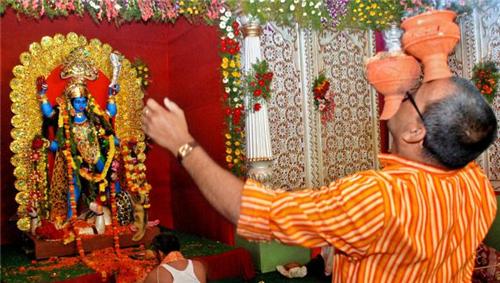 Kali Puja is celebrated with much enthusiasm in Kolkata. The citizens leave no stone unturned in the arrangements for this very popular auspicious occasion. Kali Puja is very famous festival of the city.
You will get mesmerized by visiting the two most important temples i.e. Kalighat Kali and Dakshineswar Kali Temple in Kolkata where mammoth size arrangements are made to celebrate this special occasion . Devotees across sections of society throng to the temples to seek the blessings from the Goddess Kali.

Another important Puja among Bengalis is the Saraswati Puja or Vasant Panchami celebrated by students commemorating the homecoming of Goddess Saraswati (icon of learning). In Bengal, this Puja is celebrated in schools and educational institutes that provide an opportunity for the regrouping of the students.

Bhai Dooj is celebrated after two days of Diwali by sisters for the good health and long life of their brothers. This particular festival reinforces the affection of love between a brother and a sister. 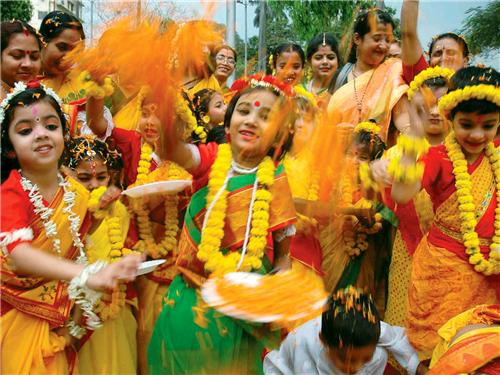 With the splendor of spring processing the contours with vibrant flowers, the God of romance and love celebrates the season with a magnificent revelry of colors on the full moon day of Phalgun, the month of blossom and beauty.
The spring festival of colors, Holi is also known as Doljatra where the season rejoices in devotion and love for Krishna, a confluence of divine adoration and festive celebrations.

The credence of the Hindus that every year in the midsummer Lord Jagannath with his sister Subhadra and his elder brother Balabhadra goes travelling on grand chariots on vacation has given elevate to one of the most immensely colossal religious festivals in India -the Rath Yatra or the Chariot Festival.
As the year draws to a close, Kolkatans get into the celebration of yet another year of prosperity and bliss to welcome the first day of the Bengali calendar. This period of time (entire month of Boishakh) is considered to be an auspicious time for marriages.
Bengali women and men adorn themselves in their traditional wear, white saris with red borders , dhoti-kurta to take part in the grand processions called Probhat Pheri early in the morning as a mark of delight to welcome the first day of the year.
The season of Pohela Boishakh additionally rejoices the birthday of Rabindranath Thakur celebrated with love and reverence in schools and colleges.

Apart from these religious festivals, the city also hosts several trade and technological fairs. Various cultural festivals like National Theatre Festival, Jatra Festival, Calcutta Film Festival and music conferences are also organized in the city to encourage cultural genius of the country.
It is one of the main cities in India who have preserved the ethnicity and cultural heritage where the richness of tradition, art and literature clings proximate to every Kolkatans. 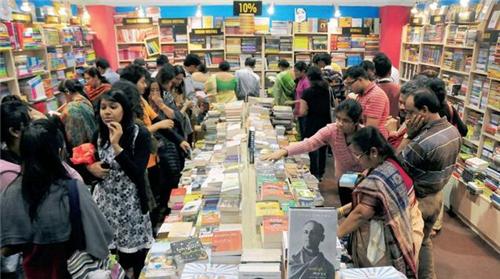 Kolkata Book Fair is one of the largest book fairs in the country held every year from the end of January till early February. This 12-day long Book Fair is held over a large area of "Milan Mela" near Science City on E.M.Bypass.

The Dover Lane Music Conference initially started as a small get together of some music lovers in the lanes of Kolkata. But as time flew, it became the biggest musical event in Kolkata.
The festival is organized at Nazrul Mancha every year between January 22 and 26. Renowned classical singers from various parts of India come here to participate in the mega musical event.

The Kolkata film festival is organized every year in the month of November. It is a gala event, showcasing films from various countries. This week long festival brings the film fraternity to Kolkata.

National Theatre Festival is probably the biggest event in the Indian Theatre Calendar. It is organized in the month of December every year. Usually, the festival is held at the Academy of Fine Arts attracting thousands of theatre lovers from various parts of the country and also from abroad.