Gurdwaras in Kolkata are known for their sacredness and beauty. Just like other parts of India these Gurdwaras are visited by large number of Sikh followers. Here everyone can enjoy the Langer (where people can eat free food). 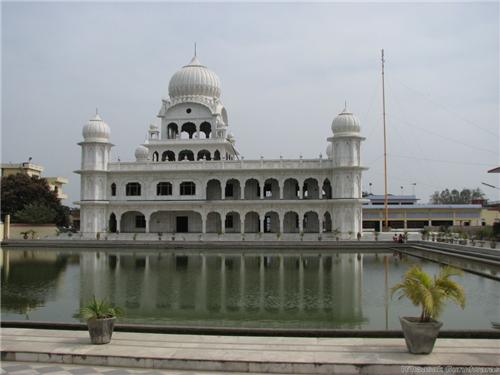 Gurdwara Bari Sangat possesses its individual significance. This is one of the popular Gurudwaras visited by Sikh Guru, Shri Guru Nanak. It was put up in the remembrance of Guru Nanak Sahib Ji. This place remains jam-packed through out the year.
Gurdwara Bari Sangat is a sacred site as the place was visited by the heavenly Nanak Sahib Ji. He paid a visit to this place when he was returning back from Decca to Punjab. In the course of his journey, Nanak Sahib Ji resided at a place which is known as Ban Sangat.
This is the place where this stunning and spectacular Gurudwara was built in his tribute. Also, Shri Nanak Sahib also paid a visit to the King Raja Bahadur Singh.

The King Bahadur Singh experienced tranquil acquaintance with Nanak Sahib and he was determined to build a distinguishing sacred place at Ban Sangat. So, Gurudwara Bari Sangat was built.
This religious site is also said to be visited by Guru Tegh Bahadur, 9th Guru of Sikhs. Henceforth, the significance of this place has increased manifold for the Sikh followers.
Shri Tegh Bahadur visited the place while his journey to Bengal and Assam. Gurdwara Bari Sangat is built on a big area. Raja Hazuri constructed this sacred Sikh holy place and took care of it untill his death.
This Gurudwara is of high historical significance in the city of joy. It is situated in the Tullapati Cotton Street. Its structural design is antique and strong as it was constructed prior to 1852 A.D.
Address: - 172, M G Road, Barabazar, Barabazar, Kolkata, West Bengal 700007.

The name 'Chhoti Sangat' reflects the stature of the place. It is probably one of the smallest Gurudwara in India and is situated inside a home. It is in close proximity to the Bhuteshwar Gali. Despite being limited in size it is one of the most visited Gurudwaras in Kolkata, West Bengal.
Guru Tegh Bahadur and Guru Govind Singh, two gurus of Sikhism have bequeath this place by paying their supreme visit.  Gurduwara Chhoti Sangat at Bura Bazar is maintained by the agrahari sikhs.
Address: 112 Cotton Street, Kolkatta, West Bengal, India, 700007

This Gurdwara is exceedingly admired among the Sikhs community of not only Kolkata but also the adjoining regions of Bengal, Bihar and Assam. This is also identified as Sri Guru Singh Sabha Kolkata, utmost of Sikh community.
Address: 31, Rashbehari Avenue, Kolkatta, West Bengal, India, 700 026

This is a Sikh Gurdwara located in Howrah, West Bengal. The earliest Prakash of Shri Guru Granth Sahib was completed in the year 1935. The Gurdwara is suitably situated in close proximity to the Howrah Railway Station.