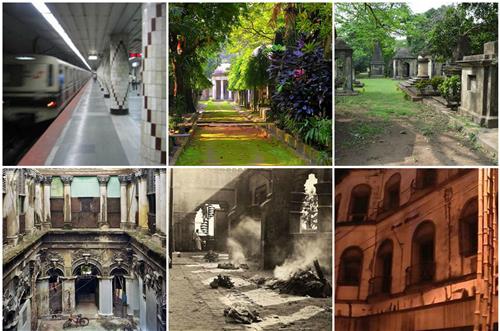 Kolkata is called the cultural capital of India. The archaic colonial architecture, century old buildings and the numerous cemeteries dotting the city gives the city a different flavor. Many researchers and scientists who are interested in studying the occult and spectrology have been naturally drawn to this city. Several haunted places are said to exist here and here are the top horror stories that surround them.

Putulbari or the House of Dolls in Kolkata

The crumbling yet devastatingly beautiful archaic roman structure of Putulbari stands on the banks of the mighty Ganges in Ahiritola. Ask any veteran Kolkatan and you will get to hear the name Putulbari in the list of most haunted places in Kolkata.
The building got its name from the dolls engraved on the Roman stands though the inspiration may well lie in its rather sordid past. Urban tales say that rich landlords and zamindars used to keep poor girls captive in this house for their own pleasure. After exploiting these girls the zamindars used to kill them. The souls of these poor women still wander about the upper stories.

The Royal Calcutta turf is one of the most serene looking places during daylight with stretches of green verdant grass. However during night this zone puts on a spooky flavor and has managed to scare a lot of poor souls who made the mistake of visiting this place during night. 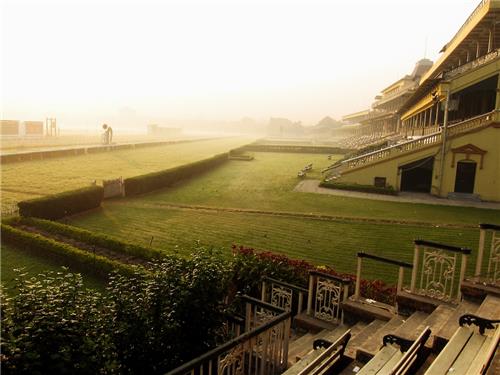 There is a very interesting tale behind the “scare” quotient of this place. George Williams a 19th century race maniac was overtly fond of his pearl white mare  named “Pride” who had won him several races and trophies on the race track.
However with time Pride started losing her pace and one day she lost the famous Calcutta Derby Race. Next day she was found dead on the race tracks and since then her unsolved death has haunted the tracks. On moonlight nights especially on Saturday there are high chances of seeing a beautiful white phantom mare galloping across the tracks.

The majestic Hastings House in Alipore in Kolkata is one of the major landmarks of the city. This ancient building dates back to the days of Governor General Warren Hastings who used the house for his residence.
However, now this huge building is used by Calcutta University to run a special women’s college here. Several students studying tin this college have reported ghost sightings and scary incidents witnessed by them.

Some students claim that they have seen an old British man seated on a horse and looking for files around the house. Some other students say that last year a student died while playing football and since then his spirit has been seen around the campus.

Interestingly the name Writers building didn’t get its name from any notable literary personality but rather from the junior staff who are engaged in clerical activities in the building. Right now this building is the secretariat building of the West Bengal State Government. The gigantic brick red construct stands right at the center of the BBD Square of Kolkata. 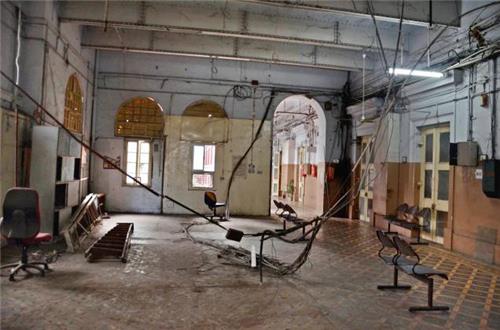 Several rooms of these bustling busy building remains locked. There are several tales circulating amongst employees and staff about ghosts that occupy some rooms.
Each and every person vacates the building after 5.30 pm and there is not a living person to be seen around after dusk. The nearby vendors have often reported sounds of people crying out at night from inside the building.

Earlier known as the Dhakuria Lake the Rabindra Sarovar is a very famous place in Kolkata. The nearby metro station the Rabindra Sarovar metro station is also quite busy as thousands of people commute to and fro via this station every day.
Passengers taking the last metro around 9.45 p.m. have had some pretty weird experiences in the past. Spooky shadowy figures have been seen to prowling around the metro track and drivers have often reported visibility problems because of some shadowy figure crossing the track. People usually avoid taking this metro at night.

The South Park Cemetery is one of the most photogenic spots in the City of Joy. There are tall swaying trees, ancient tombs and lush greenery around which inspires painters, photographers and nature lovers.
Mostly the graves here belong to British soldiers and it is considered to be one of the most ancient burial grounds dating back to 1767. The reports of this cemetery being haunted were circulating for a long time but it was in 1998 that the news first reached the media. 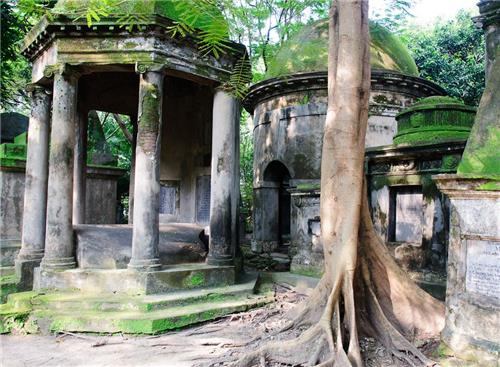 According to locals once a group of friends went there for photography and one person saw a fist like shadow in front of a tree in the photographs. Soon the photographer had an asthma attack (though he didn’t have any medical history for the same) and the other group members also fell sick.

The list would never be complete without the mention of Kolkata’s most famous library situated in Belvedere premise, the National Library. Two things make the Library a celebrity premise.
The rare collection of books and the series of haunted incidents which were reported there. Many visitors have reported strange incidents about the National Library.