Kolkata Metro serves the Indian city of Kolkata and the neighboring districts of North 24 Paragnas and South 24 Paragnas. Kolkata metro train was the only of its kind that came into operation  in the year 1984.
It is considered to be the 17th zone of Indian Railways. Kolkata is the first city in India to have an underground metro railway.

The idea of Kolkata Metro Train  was first conceptualized in the year 1949 by then Chief Minister of Kolkata Dr. B.C. Roy  to solve the ever occurring traffic problems in Kolkata. He aimed to build an underground railway transportation system to regulate the flow of traffic .
With a view to finding out an alternative solution the Metropolitan Transport Project (Rlys) was set up in 1969. By 1971 the MTP developed a master plan suggesting the construction of five major transit routes of 97.5 kms for Kolkata.
With this MTP also considered the north south portion adjoining Dum Dum to Tollygunj as the most busiest route of about 16.45 kms. This project was sanctioned in June 1972 and on December 29, 1972 the foundation stone was laid down by the then Prime Minister Late. Honorable Smt. Indira Gandhi. 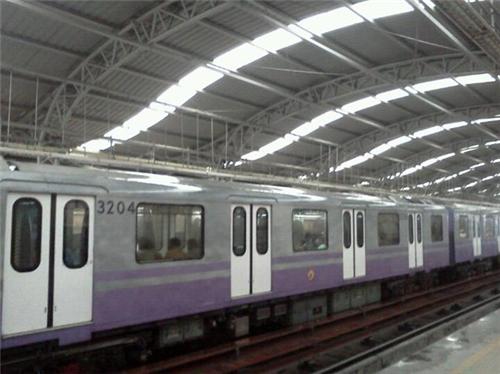 Despite facing tedious issues including shortage of funds, irregular supply of materials, shifting of utilities  Kolkata metro became a reality on 24th October, 1984 with partial commercial service covering a distance of 3.40 km with five stations between Esplanade and Bhowanipur.
This was followed by another 2.15 km stretch in the north between Dum Dum and Belgachhia on NOVEMBER 12, 1984.
The commuter service was further extended up to Tollygunge on APRIL 29, 1986 covering a further distance of 4.24 km making the service available over an overall distance of 9.79 km and covering 11 stations. 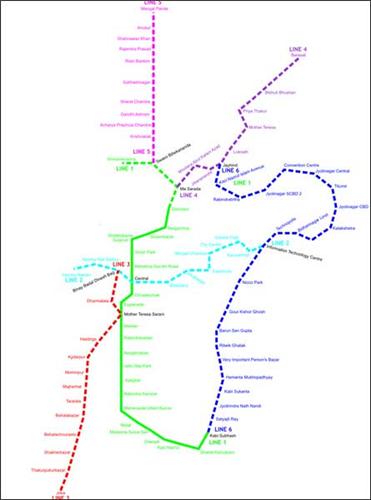 Currently there are six metro routes including the existing and proposed ones which are as follows:

This is the existing Kolkata metro line with a total length of 28 kilometers. Being one of the earliest metro routes it become operational in October 1984.
Out of its 24 stations 15 stations are underground. This line operates from Noapara to Kavi Subhash.

Partially funded by Japan Bank for International Cooperation, this is going to cost approximately USD 746 million.
The length will be 14.67 km and will cover major destinations in Kolkata. An attempt is being made to connect Kolkata and Howrah through an underground channel. The metro line would connect from Salt Lake Sector 5 in the East to Howrah Maidan in the West.

This line would run between Joka which is located in extreme south of Kolkata to BBD Bagh. A 16.72 km long metro line is built by Rail Vikas Nigam Limited and Simplex Infrastructure. Line One and Line Three would have Park Street as their interchange junction.

This18.5 km metro line will link  Noapara to Barasat via Netaji Subhas Chandra Bose International Airport . No doubt it will  reduce the time for reaching the airport which otherwise is wasted due to the crowd of vehicles on the roads.

This line five of Kolkata Metro would run from Baranagar to Barrackpore.

Line Six of Kolkata Metro would run from New Garia to Airport. This would reduce the traveling distance from Southern fringes of Kolkata to Netaji Subhas Chandra Bose International Airport. Majority of the metro stations on this line are named after eminent personalities.

All the metro Kolkata metro trains are air-conditioned and equipped with huge fans. Seats in all the compartments are reserved for for women and senior citizens.

One would be surprised to know that Kolkata metro fare is cheapest when compared to other metro rails of the  world. With the minimum fare being INR 5 and the maximum fare is INR 10, it is certainly an economical mode of transportation.
Moreover, there is a facility of smart cards available in Kolkata Metro which provides a concession during each of the travel journey. These smart cards are available in recharge values of INR 100, INR 200, INR 300 and INR 500.

When all the routes will become operational, the city is likely to heave sign of relief from  the current traffic congestion problems.