The Indian railway which evolved during British era in 1853 has since covered a very long distance.Today it is one of the largest networks in the world comprising of 115000 Km of tracks and 7,500 stations.
The Indian railway not only joins one part of the country to another but also acts as a carrier of cultural traditions of the country.
Kolkata railway station also known as Chitpur station. Others being Sealdah Station in Kolkata, Shalimar Station in Howrah and Howrah Station in Howrah.

The Kolkata station or the Chitpur railway station opened in 2006, is one of the newest intracity railway stations. Before being developed as station, the place was just a large goods yard and a coal loading yard. What was once used as a goods line is now a famous station.

The station was developed to overcome the passenger crowding at Sealdah station. After much discussion about the location, the site at Chitpur was chosen and approved by the Railway Ministry in 2003-04. There are 5 platforms here, amongst them 1 and 2 are allocated for suburban trains and 3, 4 and 5 are long- distance trains.

There are also small waiting rooms and retiring rooms that passengers can use in case of any delay in the arrival of trains. Pre-paid and authorized taxi stands are there to assist you. There is also a bus stand outside the station. You can also catch tram from nearby Belgachhia Depot or from the nearest tram track at Radha Gobinda Kar Road for tram routes 1, 2, 4 and 11. The nearest metro station is also at Belgachhia.

Opened in 1862, today Sealdah railway station is one of the largest and busiest stations in India. It has three station terminals- Sealdah Main, Sealdah North and Sealdah South.
There are two separate set of tracks for the north and south section. The mail/express terminal is the Sealdah Main that’s used for long distance trains to northern, north-western, north-eastern & eastern India, through Dankuni line and Bandel line. 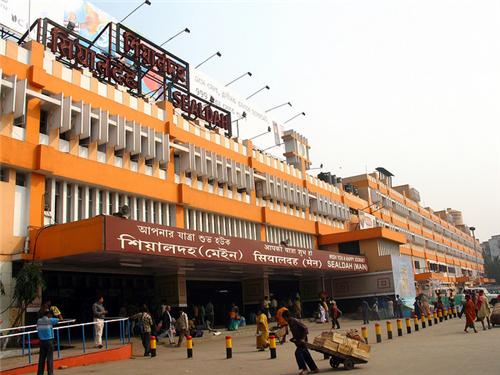 You can also catch tram from nearby Belgachhia Depot or from the nearest tram track at Radha Gobinda Kar Road for tram routes 1, 2, 4 and 11. The nearest metro station is also at Belgachhia. Apart from these there are many other hotels located nearby Sealdah Railway Station where you can stay and relax after a long and tiring journey.

Counted amongst the largest railway station in India, Howrah Railway Station with its mammoth size witnesses influx of tourists and visitors throughout the years. With its unparalleled capacities it effectively handles a huge amount of traffic every day.

Shalimar Railway Station is one of newly constructed railway stations serving Howrah and Kolkata. Located near Shibpur area of Howrah it came into being in the year 2000. The station comes under the South Eastern Railway and is a connecting link for trains to Haldia,Amta, Kanthi, Medinipur and others. Small in size it has two platforms.

Apart from these there are many other hotels located nearbyShalimar Railway Stationwhere you can stay and relax after a long and tiring journey.