Trams operated by Calcutta Tramways Company (CTC), since its inception in 1902, has occupied an important place in the heart of Kolkatans. Today Kolkata Trams serves as the oldest operating tram in Asia and perhaps the only one in India.

In the year 1873, it was decided to run the Calcutta Tramways  Service between Armenian Street Ghat and Sealdah but it was given a cold shoulder i.e. there were a very few commuters and hence the service was discontinued in the month of November.

The electrification of tramways started at the beginning of 19th century and metre gauge were shifted standard track and Kolkata Tram was run for the first time from Esplanade to Kiddopore. In 1904, the route from Esplanade to Bagbaazar via College street was opened.

In the year 1943, Kolkata system of tram was connected to Howrah , which was a major transition , thereby making the total length of tram approximately 70 kilometres. 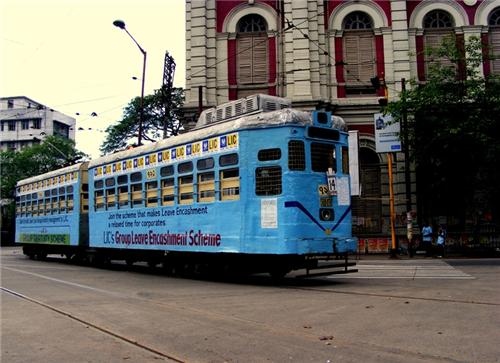 You can find it passing through the crowded streets. Today Calcutta Tramways Company with a fleet of 257 trams is making traveling and trasporation much easy in the city of joy.

They are  17.5 metres long and 2.1 meters wide trams are divided into compartments.  Each compartment with wide  entrance has a seating  capacity of 62. In total it can carry loads of  200 passengers.

Over one hundred and twenty five Kolkata trams run every day in Kolkata out of the total two hundred and fifty seven trams which the government owns.

Most of the trams were bought from the English Electric Company and Dick Kerr and Company till the year 1952 after which the production started being in India.

Only single Decker trams were used initially. Double Decker trams like in Mumbai have never been used in Kolkata trams and usage of triple decker trams has been extremely unsuccessful.
There were several types of rolling stocks used in trams namely Old SLC type, SLC type, Articulated and Renovated SLC type, New Cars and Single Bogie type.
Proposals are being floated to built trains with amenities such as restaurants and fully air-conditioned facilities. The latest addition is one such tram which offers a tour of the entire Kolkata city. Today with seven depots and nine terminals trams are serving the purpose of transportation in a better manner.