Visit to the Millennium Park in Kolkata

Theme parks and recreational centers are mushrooming and multiplying in every city every day. But whether a theme park can offer a breathtaking view without encompassing much recreational activities is a rare phenomenon.
As visitors take a stroll along the banks of the Hooghly River from BBD Baug (as in Benoy Badal Dinesh Baug also known as Dalhousie Square) towards Strand Road. 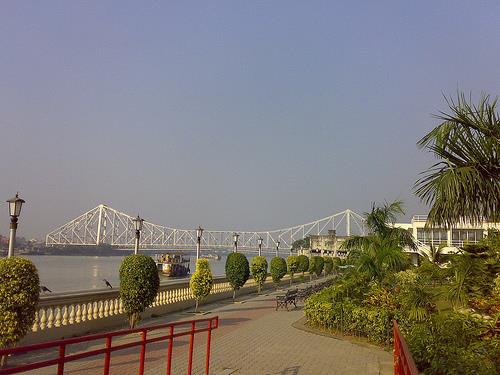 Millennium Park runs parallel with the Hooghly River along the embankments like Babughat and it was built as a part of the beautification drive of the riverfront and also to uplift the anti pollution drive.
Gifted by the Kolkata Municipal Development Authority (KMDA) to the citizens of Kolkata as a millennium exhibit, Millennium Park was inaugurated on December 26, 1999 and thrown open for the public from January 1st, 2000.
Although the land on which the park has been created belongs to the Kolkata Port Trust, it is manned by both KMDA and the Port Trust. The long stretch along the Hooghly River offers a scenic landscape with both the Howrah Bridge and the 2nd Hooghly Bridge visible from the park grounds.

The ideal time to visit the park premises are in the evening when the park is illuminated by the lights adorned on either side of the walk, thus emanating a special aura to the park and the enigmatic riverfront.
Faraway the illuminated Howrah Bridge beckons while boats and steamers ferries passengers to and fro to different destinations. 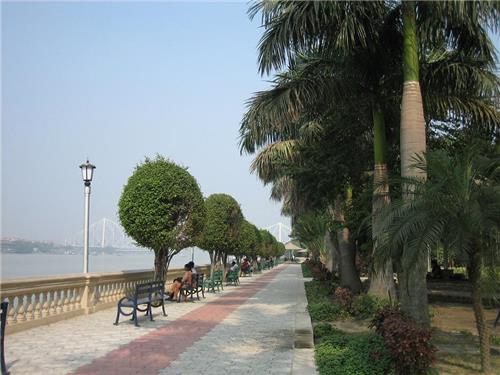 The park becomes a huge crowd puller on special days like Christmas and New Years Eve. Added attraction of the park is its unique location; adjacent to Floatel, a floating hotel on the Hooghly River and offering a grand view of the river with open air decks and banquets.
Regular cruises are organized from Millennium Park to places like Botanical Gardens, Howrah Bridge, Dakshineswar Kali Temple, Belur Math and Ferry Ghats along the Hooghly River. The Park can be visited any time of the year, however winter is the best time to visit it.