The ghats are a common sight in many parts of Northern South Asia. The term ghat refers to a series of steps leading down to a body of water, particularly a holy river.  However, in Bengali-speaking regions, ghat is defined as a set of stairs that can lead down to something as small as a pond or as large as a major river.
Amongst all other ghats Outram Ghat located near Howrah Bridge deserves special mention.


Outram Ghat : Past and Present 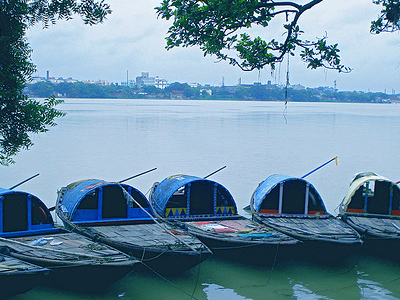 The historical glory of this serene ghat can be traced back to the times of English East India Company. The quaint looking Outram ghat owes its name to Sir James Outram , a brave General of the British Army.  You can find many bathing or performing religious rituals on the sides of the ghat. During festive seasons it is the most preferred location for the immersion of idols.

Enjoy your time at Outram Ghat

The spot is famous even today owing to its serene and sober riverside and its strategic location, making it a perfect destination for early morning and evening walk. This place is also the center for various holy rituals from baths, birth and dead rituals to religious activities including the immersion of idols.
Outram Ghat owing to its spectacular location is a one stop spot for tourist to enjoy nature at its proximity. The ghat is crowded with locals who spend hours sitting together in peace or making the most of the romantic boat rides with operational traditional wooden boats and speed boats.
Entry to the Cuisine Cruise requires an inclusive ticket to board the cruise. On Sunday the vessel takes off for a round trip from Shutanuti Ghat to Baghbazaar to Belur Math and vice versa.