Salt Lake City, a satellite town built on reclaimed Bidhannagar area is one of its kind in Kolkata. The credit to planning and building this organized city goes to the then Chief Minister Dr. Bidhan Chandra Roy. As build on marshy area nearby to salt-water lake, it is popularly called Salt Lake City. 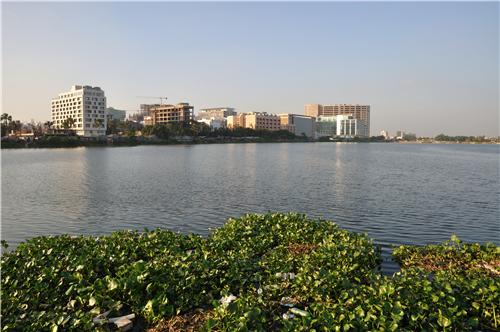 It is relatively less polluted compared to other parts of Kolkata. A city equipped with modern infrastructure is the home to Salt Lake Stadium which is the second largest stadium in the world in terms of capacity.
This in turn ensures smooth functioning of the city. Ample care has been taken to maintain the ambiance of this part of Kolkata.

In its urban structure and its architecture, Salt Lake City is an outstanding example of town that has developed progressively incorporating artistic elements of highest quality from every prospering period.
The city with Central Park comprising statues of Swami Vivekananda, Subhas Chandra Bose and Kaji Najrul Islam is complete in its form and format. This magnificent park stretches to about 100 acres in landscape and is thus regarded as the “Lung of Bidhannagar".
The township is home for several research and professional institutions of national importance, Universities including Saha Institute of Nuclear Physics, Variable Energy Cyclotron Centre, Indian Institute of Foreign Trade, Kolkata, Institute of International Trade, All India Institute of Hygiene and Public Health, National Institute of Fashion Technology, West Bengal National University of Juridical Sciences, Techno India, Institute for Inspiration & Self Development (IISD), Rabindra Bharti University and any more.

There are equipped private and Government hospitals like AMRI,Kolkata Heart Research Institute, Seva, Anandalok Hospital, Columbia-Asia, and number of 5-star hotels in the vicinity of the city.


Places of Interest in Salt Lake

Salt Lake City has retained their charm over the years and has done much to contribute towards the developing multilingual culture, rowing populations, extensive urban development and growth of new technology.
Chopseys to Italian pizzas, Punjabi Thali to Tibetan momos, the town has a coalescence of flavors tantalizing the taste buds of all lingual.