Shaheed Minar - A Monument of Historical Importance In Kolkata

In a close proximity to Kolkata Maidan lies tall imposing Shaheed Minar , once known as Octerloney Monument, after its founder Sir David Ochterlony. The 48 meters high minar today is a dedicated in the honor of those great soldiers who sacrificed their lives for the freedom of India.
Today it has become the center of political meetings and rallies in Kolkata. Party assemblages and seminars, on various contemporary issues are often held here. 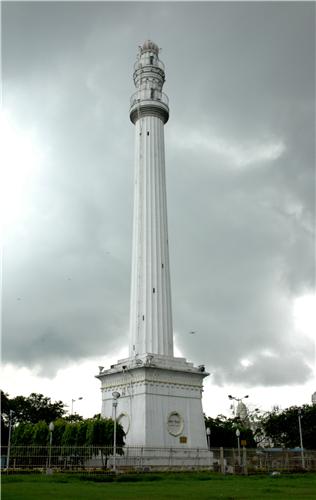 Located In the heart of the metropolitan city of Kolkata near Esplanade, the Shaheed Minar is situated on the Kolkata Maidan.
The monument that was established back in the year 1826 marking the victory of Sir David Ochterlony over Marathas in 1804 and the victory of the East India Company’s armed forces over the Gurkhas in the Anglo-Nepalese War.
The base is structured in Egyptian styles. However the structure of the main monument follows the Syrian architecture.
Further divergence can be noticed in the dome that represents Turkish architectural design. Overall; the architecture is symbolic of the Ottoman architectural designs.
Shaheed Minar is located on Rani Rashmoni Avenue in the city of Kolkata in West Bengal. In recent times it has become the favorite venue for staging political meetings and rallies for all parties in West Bengal.
It all started back in the year 1931 when the first convocation meeting was chaired by Nobel Prize winner poet Rabindranath
Tagore on the eve of killing of Bengali youth in Hizli. West Bengal Government has decided to illuminate the tower at the evening times so that visitors can also go up the top during evening times.
Since 1997 when a tourist jumped from the lower balcony of the monument, police permission is necessary for climbing the minar.Last persons who got on to the top of the Minar were Gopal Krishna Gandhi and his family, who was the former Governor of West Bengal.

The monument carries a combination of three types of architecture. While the base is made following the Egyptian architecture, the pillar follows Syrian design and the dome is constructed in Turkish Ottoman architectural design.
The construction started in the year 1826 and was completed in 1848. It is under the protection of the Government of West Bengal. The monument was recently renovated in the year 2011. The chief designer of the monument was J. P. Parker. The monument has two balconies on its top where the visitors can move through a flight of serpentine stair cases. On count there are 223 steps to climb. Renovation of the monument was completed in June 2012.

Nearby Points of Attraction

The monument is located on the Kolkata Maidan and that has resulted in the vast field being called as the Shaheed Minar Maidan (Brigade Ground). Foreigners will have to submit copy of their passports as well. Getting on top of the monument is an experience in itself as it offers a bird’s eye view of the great city of Kolkata, something akin to the London Eye.
For instance Victoria Memorial Hall,  Nandan Hall, the Indian Museum and the Planetarium are some of the places that are included in every tourist’s itinerary.

How to Reach Shaheed Minar ?

If you are coming by air to Kolkata, you can avail public transport or hired taxis to reach Esplanade where the monument is located. Both bus and taxi services are available at Dumdum Netaji Subhash Airport.
Similarly, those coming by train and reaching Howrah Station can avail bus, tram, and taxi services to reach Esplanade that is a tram and Bus junction point. Visitors can also avail bus services from different parts of the country and from all parts of West Bengal to Esplanade and visit the Shaheed Minar in Maidan.

All types of accommodation, luxury, medium range, and budget type are available in and around Esplanade area. Some of the famous hotels nearby are the Pride Hotel , Taj Bengal , Swiss Hotel Fortune Park Panchawati , ITC Sonar Kolkata , Park Hotel , Fortune Select London , The Keenylworth , Peerless Inn , Broadway Hotel , Mayur residency , and Grand Hotel .
There are many others within 5 km of the monument and either accommodation or food will not be a problem. Besides the in house restaurants in these hotels and other hotels there are several different food points nearby. Shaheed Minar stands with its head high representing the rich culture and heritage of Bengal and India.