What is So Special About Tangra in Kolkata ?

In the heart of Kolkata, Tangra or the Chinatown boasts of being home to the largest number of Chinese immigrants in the country and is said to be Kolkata’s very own China. It is believed that the ‘Hakka’ Chinese from the Guangdong, Jiangxi and Fujian, have lived in Kolkata for the past 230 years. The Chinese had come in search of work to Kolkata’s port, and began working in tanneries, producing leather goods.
The Chinese community settled in Tangra, as it developed to be a major hub manufacturing leather products and providing employment to scores of people. Later however, tanneries were banned by the Government and only a few managed to remain open. 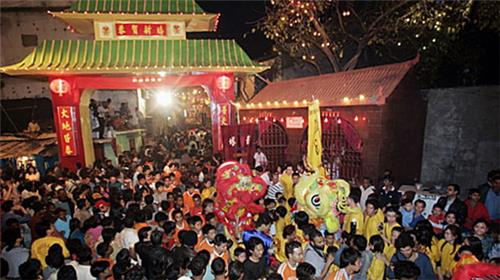 As you walk along the alleys, you come across tiny Chinese shops selling a variety of goods, Chinese Restaurants, dangling paper lamps that reflect the rich cultural confluence of the Tangra region. The pictures of Tsai Shen Ye, the Chinese God of Wealth, hanging from the entrances and cash boxes of the shops are noteworthy.
The Chinese community in Tangra speak Mandarin, fluent English, while some even speak and understand Bengali fluently. When you get to witness the traditional and unique celebrations, replete with lion and dragon dances etc.

Though the educated younger generations in Tangra have migrated to other places like US, Canada, Hong Kong, Australia, Taiwan etc in search of better prospects and tourists still visit here to lay their hands on the authentic Chinese cuisine, sold in the numerous Chinese Restaurants here.
The Chinese people, born and bought up in Kolkata, consider India to be their mother land.  Apart from restaurants, one can also find numerous family run eateries and roadside stalls. Other specialities of Tangra include fried prawns, dim sum, chilli chicken, shark fin soup etc.