Everyone knows Howrah Bridge is synonymous with Kolkata. Standing on river Hoogly, 823 metres longest cable–stayed Vidyasagar Setu named after the great Bengali polymath and the figure of Bengali Renaissance Ishwar Chandra Vidyasagar, is a toll bridge that connects the cities of Kolkata and Howrah.
Also known as Second Hoogly Bridge, it is one of the longest cable strayed bridge in Asia and the longest in India. 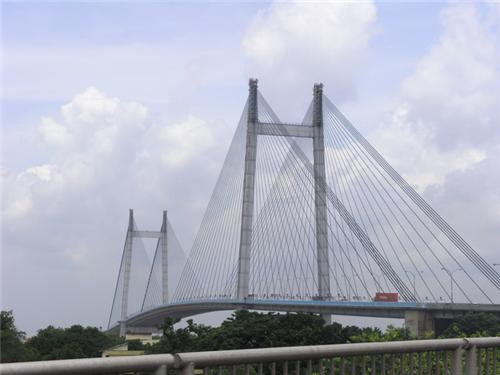 With growing population of Kolkata and Howrah after independence,traffic congestion became order of the day. By 1970s authorities decided the construction of an alternative to ensure more smooth traffic between the cities.
With  this began the construction of 823 metres longest cable–stayed bridge in India which is also  one of the longest in Asia. The Construction began in 1979, and the bridge was commissioned by October 1992.
Today it maintained by the Hooghly River Bridge Commission and used by around 30,000 vehicles daily.

Designed by Schlaich Bergermann & Partner, and checked by  Bharat Bhari Udyog Nigam Limited and Freeman Fox & Partners, its construction was carried out by the consortium of Braithwaite, Burn and Jessop (BBJ).
It took around twenty two years to complete the construction of Vidyasagar Setu and involved cost amounted to about 3.88 billion Indian Rupees. Like majority of the other bridges in India, Vidyasagar Setu is a toll bridge. But the good news is that it has free bicycle lanes promoting eco-friendly ride in the city.


A Glowing Example of Architectural Excellence

The bridge is made using steel pylons of approximately 420 feet high arranged in the shape of a fan. The bridge has three lanes running in each direction and wide footpaths of three feet on each of the sides.
The main cover of the bridge was constructed with the help of a deck crane. The pylons of the bridge were constructed using a specially designed crane of which had a capacity of forty five tones.
It would not be surprising to know that the structural steel used for the construction of Vidyasagar Setu weighs around 13200 tonnes. The bridge has been subject to prototype wind tunnel tests at the Indian Institute of Science in Bangalore
There are many other services provided in the structure including the handrails, lightning arresters, crash barriers, gas service support structures, telephone and electric lines, lifts in the pylons, and a maintenance gantry.
Majority of the travelers from foreign countries who visit Vidyasagar Setu compare it to Golden Gate Bridge of California which is rated amongst the top 25 landmarks of Travellers Choice. The bridge naturally therefore attracts all of those love photography. One must not only travel through the bridge but also spend some time on the bank of the Ganges river and have an enchanting view of the bridge.

Recently, it has been observed that there have been several accidents on Vidyasagar Setu due to traffic congestion. Planning is being done to make two one way entry and exit ramps which would help in the easy flow of traffic.
Along with Vidyasagar Setu, one can also view other bridges including Vivekananda Setu (which was also a railway bridge), Howrah bridge which is now re-christened as Rabindra Setu and Nivedita Setu.
Overall, Vidyasagar Setu is an architectural marvel in itself.


A Glance to Vidyasagar Setu